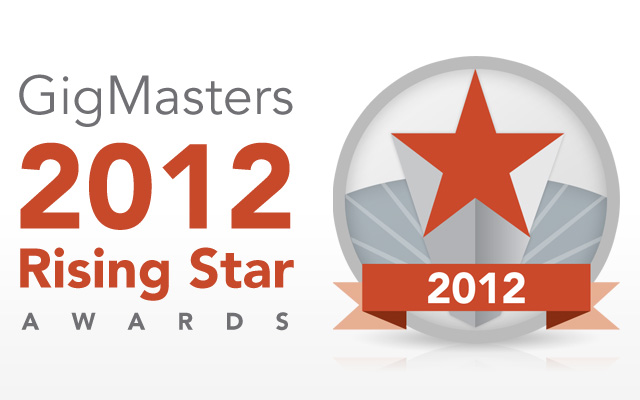 After much anticipation, we're excited to finally be able to announce the official winners of the 2012 Rising Star Awards! Hooray!

We know there's been a lot of hoopla around this announcement (that's if you count multiple videos, a press release and dozens of tweets as hoopla) but that's only because we know so many of you look forward to this all year.

Before we get to the announcement, a quick word about these awards…

The Rising Stars are based entirely on booking revenue earned from GigMasters bookings and only client-initiated gigs count towards the awards. To calculate the winners, we group our performers and vendors by category so that clowns, for example, do not compete against cover bands and wedding tent rentals do not compete against string quartets.

Please check out the full list of winners and have a peek at the Rising Star press release below:

Awards given to highest earning, most booked event vendors and entertainers in 142 categories including Top DJ, Top Comedian, Most Popular Wedding Band, Most Popular Corporate Event Entertainer and more.

South Norwalk, CT (January 30, 2013) —The web’s #1 event booking service, GigMasters.com, has announced the winners of the 2012 Rising Star Awards recognizing the top event musicians, entertainers and vendors in the U.S. and Canada.

Best known for booking musicians, DJs, comedians, magicians and other live entertainment acts, GigMasters has begun to broaden its vendor offerings to include event services such as limousine rentals, wedding tents, bartenders and more. This expansion is reflected in this year’s Rising Stars which have been awarded to 142 winners, a record high for the sixth-annual awards.

“I personally want to congratulate all of this year’s winners,” says Marissa Latshaw, GigMasters’ VP of Marketing. “It’s great to see how the 2012 winner list honors not only our most successful entertainers but also the many party vendors that make us a one-stop service for event hosts and planners.”

Here are a few of this year’s winners:

To see the complete list of winners visit: http://www.gigmasters.com/about/rising-star-awards.aspx.

What the Winners Are Saying…

Watch a video of a few Rising Star winners showing appreciation for their awards and read some of their quotes below:

“I wish to thank GigMasters and the wonderful clients that made this all possible. As a child, all I ever wanted to be was a magician. Thanks to GigMasters and our clients, I have been given the gift of making a living doing what I love.” — Keith West Magic & Illusion Show, 2012 Top Magician

“As a performer, you're always looking for your next job. That's why GigMasters is an essential piece of the puzzle for any working musician. The site gives you the opportunity to connect with clients you might never otherwise reach. Being named the top earning Jazz Singer in 2012 is proof that doing the job you love really is possible when you surround yourself with the right people and the right tools.” — Kat Langdon, 2012 Top Jazz Singer

“Our GigMasters membership has brought in a dazzling array of gigs. We’ve been hired by celebrities, Fortune 500 companies and modest families down on Main Street. I can recommend GigMasters to anyone without any misgivings or reservations.” — Bobby Alto Music, 2012 Top Pop Trio