About Gus Person and His Successful Bagpiping Career

Posted by Audrey Saavedra on February 9, 2022 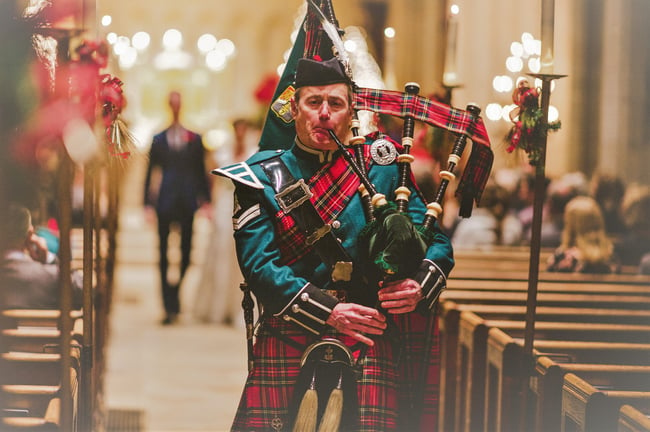 Meet Gus Person, a bagpiper from PA who has been a member on The Bash since 2013. Gus has been piping since 1964 and has played in seven pipe bands throughout his career. He has also competed in pipe band and solo piping competitions in the US. Gus has performed for numerous events over the years including weddings, funerals, memorial services, birthdays, and more.

Gus has almost 200 reviews with an average of 5 stars! He is a talented bagpiper who remains flexible with his clients, working closely with them on the selection of music and other details of their event. We caught up with Gus recently to learn about some notable recent events, his keys to getting booked, and what he's most looking forward to in 2022.

Tell us a little bit about yourself, what you do, and how you got started!

I am currently retired after working through three careers. I began piping in 1964 while a junior in high school. Bagpipes were always interesting to me. It soon became a great hobby and rewarding pastime. I have played in seven pipe bands and also competed in both solo and band competitions. I became a member of The Bash in 2013.

To this day, what has been your favorite memory as a bagpiper?

I have played at many solo events such as weddings, funerals, birthday parties, and many other special occasions.  Many band events are still very important to me.  One of my favorite memories as a bagpiper was an occasion in the mid-1990s when my band, the Nassau County Police Pipe Band and the pipe bands of the New York City Police Department and the Suffolk County Police Pipe Band participated in the half-time show at Giants Stadium in the Meadowlands, New Jersey during a Jets game.  The sound, venue, and crowd reaction were outstanding.

Can you share some details about a recent event?

In December 2019, I played at a wedding in Bryn Athyn, Pennsylvania.  Not only did I play in the Glencairn Cathedral to escort the bridal couple down the aisle after their introduction, but I also played at the top of the nearby clocktower as guests were moving by on their way to the reception.  I also played them into the cocktail hour.  This was a most dramatic and impressive venue.  It soon became one of my most memorable engagements. 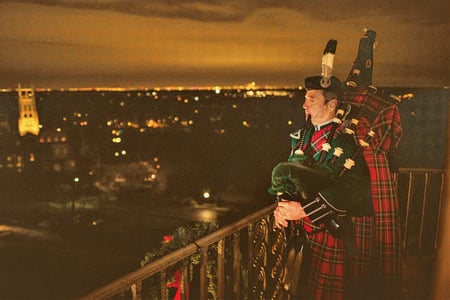 Also, in November 2021, I played at a funeral for a U.S. Air Force veteran and Scottish gentleman at a rural cemetery in McConnellsburg, PA.  As the late-afternoon sun began to set over the mountains, I sent up the strains of "Off we go...Into the Wild Blue Yonder..."  The grave included an impressive Celtic marker. 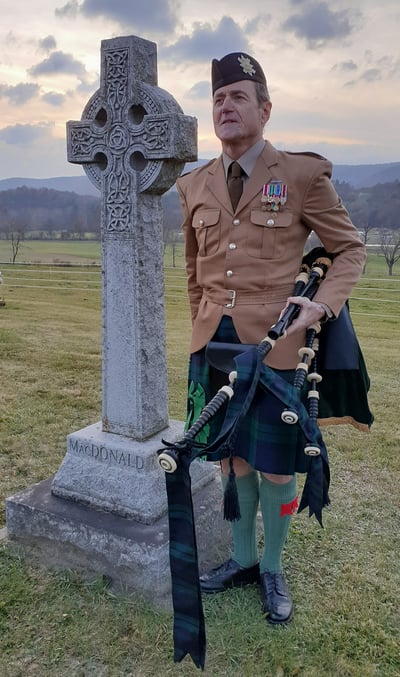 What is your key to getting booked?

There are a number of keys to getting booked.  First, reply to every lead, whether to submit a bid or decline.  Second, after submitting a bid, I always follow up with an e-mail.  This e-mail always includes some additional photos that are suggested for the type of event and an updated Piping Repertoire which lists all the various tunes that I can play.  I often make suggestions and enjoy working with clients on the selection of music and other details.  I often follow up with an additional telephone call, especially if there is a short-notice event such as a funeral.  I have business cards that I freely distribute.  I have received many repeat performances from prior clients.  To improve my verified booking totals and reviews, I often initiate a bid through The Bash if I have received an outside engagement.  I attempt to be as flexible as possible and to accommodate the requests and wishes of the clients.  While I have a standard fee for most engagements, I sometimes adapt fee requests based on the circumstances.

What are you most looking forward to in 2022?

In 2021, despite COVID, I accumulated a very large number of verified bookings.  I look forward to matching and exceeding that number in 2022.  This month, February 2022, I am looking forward to playing at an annual Robert Burns' Night Dinner at the U.S. Army War College at Carlisle Barracks, Pennsylvania.

What is your #1 tip or piece of advice for other vendors looking to get booked for events next year?

My #1 tip for other vendors is to make yourself available for as many engagements as possible.  Make sure that your profile is up to date with photos, videos, and audio selections.  Make yourself as attractive as possible related to experience and dexterity.

What's your top advice for other vendors? We want to hear! Comment below.