Behind the Juggling: Michael Karas’ Story

When we interviewed Michael Karas a few months ago, we got the short story on how he became a “world-renowned juggler.” After we met him, we became even more curious about his talented upbringing. So, he was kind enough to write this 'blogography,' which is an inspiring story for any entertainer. 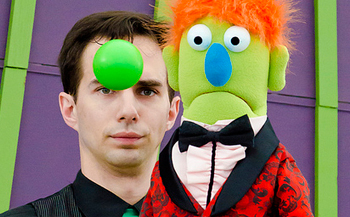 I am very fortunate. My parents have always been very supportive of me and my interests. At the same time, they have always tried to steer me away from things that they thought were not in my best interest, especially as a kid. Now when I was young, they signed me up for all KINDS of activities - zoo camps, gymnastics classes, sports, etc.

In my mind, it was sort of the "let's throw a bunch of spaghetti at the wall and see what sticks" method. I think this is smart because by exposing your child to lots of different activities, it's easy to see which ones he really connects with and which ones don't hold his interest.

It was pretty clear that sports weren't doing anything for me. However, I did seem to enjoy puppetry, gymnastics, and theater. I also hated Cub Scouts. My parents made me a puppetry stage for that Christmas, which is a good example of them encouraging my interests through unique, handcrafted gifts. It maybe wasn't as nice as a puppet stage you could get at Toys R Us, but it was made especially for me and that meant a lot to me.

The huge turning point in my life came in 2001 when I reluctantly applied to be a theater major at a Pennsylvania Arts Summer Camp called "Governor's School" because it was sponsored by the state. Since I was in 10th grade at the time, I was hoping I could spend the summer playing video games...my mom was irate when she heard this and forced me to audition. Sometimes your parents know best. I got in as a theater major and that 5 week summer camp changed the trajectory of my life forever. At the time I was in a computer science high school, doing well but very bored. The Governor's School for the Arts made me realize that I felt most at home in the performing arts. Also, it's where I re-sparked my interest in juggling. An art major at the summer camp was a very accomplished juggler and he taught me everything he knew during those 5 weeks. I was instantly hooked and although I was committed to being a professional actor, the juggling was how I let off steam.

Because I was in "smart people" classes in high school, I was luckily able to avoid a lot of typical public school peer pressure by hanging with the dorks. My mom, being a professional educator herself, home-schooled me from 2nd-5th grade, which gave me a HUGE head start that I think helped propel me to be the valedictorian of my high school in 2003. When I applied to arts schools my senior year, my friends were all very supportive - and since the arts carry a bit of "glamour" with them, all my peers were excited to hear about my "auditions" since most of them were relying on essays and interviews. They also found it odd that the valedictorian was pursuing a degree in which a perfect 4.0 really didn't matter to most conservatories.

I could literally go on and on about how supportive my parents have been. They bought me my first set of juggling clubs (for $100!) at a Renaissance Festival way back in the day simply because I seemed to show interest. And even in recent years, whenever I come up with a fun idea for a new juggling prop, I can call my brother or parents and ask them ideas about materials and construction questions. I think they are very proud that their son is "making it " in New York City as a juggler (what an odd career) without any financial assistance from them. I am also very proud of this fact.

When I first moved to the city in September of 2008, it was my goal to be a professional actor. I went to about three "cattle call" auditions before I realized that it was pointless to hide a skill that set me apart from so many other people. So although in the beginning, I tried to hide my juggling skills, I have learned as a New Yorker and as an artist that the surefire way to success is EMBRACING what makes you special, as cliche as that sounds. Everyone is the BEST at something - you have to find that thing, no matter how specific or "niche"y it is, and OWN it. As someone famous said, the goal of life is to find your gift. The meaning of life is to give it away.

I would add that in the arts field, it's a feast or famine existence. One month you're riding high, the next you're riding low. But I've always found a rollercoaster to be more fun than a highway so I choose an artistic career where I'm my own boss than to spend my whole life working for someone or something else that I don't truly believe in.

The wildly unpredictable nature of my life is what makes it so enjoyable to live.

Special shout out to Heather Liebensohn - the photographer of the image above. You can hire her too on GigMasters: HeatherLife Photography.

Playing By Air (his trio)
http://www.gigmasters.com/Circus-Act/Playing-By-Air-Productions/

Are you the life of the party too? Join GigMasters and start booking gigs today!